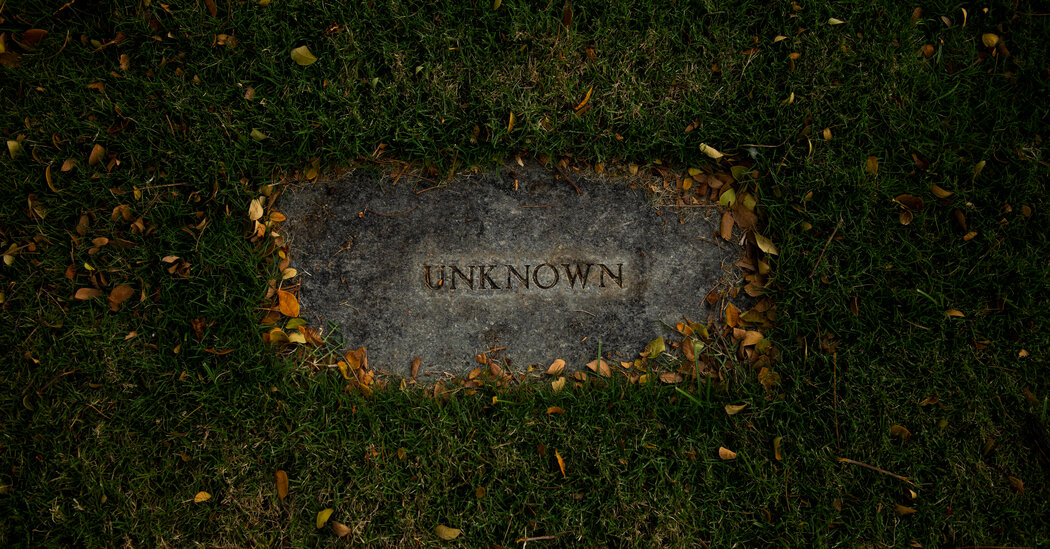 LEBANON, Tennessee — Growing up in a small town in Tennessee, Lane Martin stared at the picture of his uncle hanging in the kitchen every day but knew little about him: He had left Harvard Law School at the start of the Second World War. join the Marine Corps; he was killed in 1943 while storming a Pacific atoll called Tarawa; and his body went home in a gray steel coffin after the war and was buried in a clover-covered family plot.

But in 2020, Mr. Martin received a phone call from the Marine Corps. There had been a mistake, he was told: his uncle – Captain Edward Glen Walker Jr. – was not in that gray steel coffin after all. Instead, he was found in an unmarked grave in a military cemetery in Hawaii.

The woman on the phone said the military planned to return Captain Walker’s remains and try to determine who had been buried all those years in the captain’s grave.

“Honestly, I thought it was a hoax,” said Mr Martin, born nine years after his uncle’s death and now retired. “But they started describing the evidence, and a chill went down my spine, and I said, ‘God, they’ve got my uncle.'”

Improved forensic techniques and DNA testing can now reliably identify war dead the military once thought would remain anonymous forever. But with the breakthrough comes a twist: The same technology that can name the anonymous can also reveal the confusions and gaffes that led to servicemen being buried in the wrong graves.

After World War II, the US military had to sort through the remains of nearly 300,000 war dead. Most were sent home to families or buried abroad in marked graves. But about 8,500 sets of remains could not be identified at the time. These were buried in US military cemeteries under precise rows of marble markers bearing only the word “Unknown”.

For years, these tidy rows hid a messy history. The identification process was sometimes so messy and clumsy that it left identifiable men missing, or worse, sent them to the wrong families.

Digging into this tangled past can sometimes yield more questions than answers – as is the case with Captain Walker.

The branch of the Department of Defense responsible for identifying the war dead – the Defense MIA/POW Accounting Agency – opened a grave in Hawaii in 2017, hoping to cross off a name from the list of 104 men still alive missing in action on Tarawa. Instead, searchers found the captain, who was not on the missing list.

And when the steel coffin of Captain Walker’s grave was lifted from the red Tennessee clay and opened in 2021, things got even more complicated. Inside, wrapped in a pristine white woolen US Navy blanket, was the perfectly articulated skeleton of what appeared to be half a man: most of a left arm and leg. , ribs, vertebrae and a skull. But DNA analysis revealed a few months later that the bones did not belong to just one man, but to at least three. These remains have not yet been formally identified.

Instead of crossing off one individual from the missing list, the effort added three more.

In recent years, similar discoveries have prompted the government to exhume misidentified war dead in Mississippi, Pennsylvania, New Mexico, Maine and even one in West Point, where the agency quietly opened a grave in 2019. The headstone indicated it was the grave of a World War II First Lieutenant named Ira Cheaney, but a 1950 army memo classified warned that he probably had the wrong man. Researchers hoped to find a long-lost Medal of Honor recipient named Alexander Nininger, but DNA from the exhumed remains did not match either man.

The agency has long known that World War II graves likely contain a quagmire of past mistakes. A confidential note attached to dozens of classified files relating to the Tarawa dead warned of ‘difficulties’ in the burial process and warned that each of the graves marked ‘unknown’ could contain a mixture of remains of several people .

Partly for this reason, the agency for years avoided trying to identify remains in these graves and instead focused on field expeditions to recover missing American dead from overgrown foxholes. the jungle or remote plane crash sites – costly endeavors that gave rise to few identifications.

That changed after 2015, when Congress, frustrated by slow takeovers, asked the agency to nearly triple its output to at least 200 identifications a year. The only way to do that was to dig into the unknown graves.

The agency has since opened more than 1,000 World War II and Korean War graves, and made hundreds of new identifications. But as the agency acknowledges, it has also frequently found mixed up, mismatched and misidentified remains, though it doesn’t give a figure for how many.

“As technology advances, we sometimes encounter errors of the past,” said Dr. John Byrd, director of the agency’s lab. “We are trying to correct it in real time as the case progresses, to include full transparency with the families involved.”

The case of Captain Walker and others like it reveal how difficult it can be to unravel the mistakes of the past.

“The whole thing is fubar, to use a term of the day,” said John Eakin, a Vietnam veteran whose cousin, Pvt. Arthur Kelder, nicknamed Bud, died during World War II in a Japanese prison camp in the Philippines called Cabanatuan, along with 2,700 other men. About 1,000 have never been identified.

Mr. Eakin, a longtime aviation accident investigator, concluded from his own research that his cousin was likely buried in Unknown Grave A-12-195 at the Manila American War Cemetery, and sued the agency to open this tomb in 2014 and test the remains.

But it was not easy. Prisoners who died at the camp were first buried 10 at a time in mass graves. After the war, lower-ranking American troops with little training tried to sort them out, but the remains were often overlooked, mislabeled or mixed up, and, Mr Eakin said, families were sent off with little or no of evidence.

“I don’t want to pick on untrained GIs, because I was one,” Mr Eakin said. “But this thing was so messed up that if they had good ID, it was just dumb luck.”

Army records suggest the coffin Mr Eakin believed to contain his cousin may actually contain a mix of 10 soldiers. Finding all of Private Kelder, the agency decided, meant digging up nine more coffins. But it wasn’t that simple. DNA tests eventually revealed that the 10 coffins contained the bones of at least 15 men, including four who, like Captain Walker, have already been identified and sent home.

Hoping to assemble complete sets of remnants from the prison camp, the agency uncovered more mix-ups that required even more excavation. Since 2014, the agency has exhumed 311 graves associated with the camp.

This is a uniquely American approach. No effort from other nations that fought in World War II rivals the scope or cost of the Accounting Agency, which has an annual budget of $130 million. Other nations have generally chosen to leave the complex realities of combat buried.

Few battles have been as vicious as Tarawa. About 18,000 Marines stormed the atoll, which had been fortified by the Japanese, but their landing craft struck reefs far from shore, and the Marines had to flounder under machine gun fire. Over 1,000 were killed, along with 4,600 Japanese. Captain Walker, who was voted ‘most likely to be Chief Justice of the Supreme Court’ by his high school class, was found at the water’s edge. On Christmas Eve 1943, his mother received a telegram which began: “I deeply regret to inform you…”

By then his body had already been hastily buried along with hundreds of others in a countryside cemetery. As the war continued, the small atoll became a major American air base and some field cemeteries were paved over. Only half of the bodies originally buried on Tarawa were recovered immediately after the war, and many were only partially recovered.

It’s unclear when the Army lost track of Captain Walker, said Hannah Metheny, an agency historian who worked on the case: “It could have happened in a lot of places, honestly. “

In 1946, teams of low-ranking soldiers toiling in the tropical heat moved whatever remains they could find on Tarawa to a central cemetery, then to the Army Forensic Laboratory in Hawaii a few months later. .

Captain Walker may have remained lost, but in 2013 a private nonprofit group of archaeologists called Historic Flight began digging on Tarawa, and soon discovered thousands of bones, which the group sent to the accounting agency. Assembling and identifying complete sets of remains would mean comparing the new finds with the unknowns from Tarawa that were already in Hawaii. So the agency began exhuming the unknown graves in 2017. Searchers soon found a body that didn’t match any of the missing, but clearly matched someone who had supposedly been found before: Captain Walker.

Lebanon, his hometown in Tennessee, treated the discovery as a homecoming. In 2021, his coffin, draped in a flag, was escorted to the cemetery by hundreds of veterans on motorcycles. Cousins ​​who, in some cases, had not seen each other in years watched as an honor guard fired a 21-gun salute.

Lane Martin said in a recent interview that he bears no bitterness over the confusion. He remembered how the loss of his uncle, a promising young law student, had devastated his mother and grandmother, and knew they took some comfort in believing he was resting in the family plot. .

“Even if it weren’t true, it doesn’t change anything,” Mr Martin said. “Knowing that he was home gave them a lot of comfort. These men who were in the grave all these years gave this to my family, and I thank them.