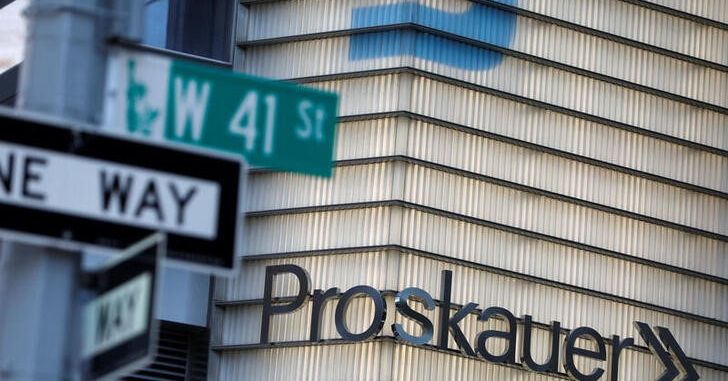 Signage is seen outside the building where the law firm Proskauer Rose LLP is located in Manhattan, New York, U.S., August 17, 2020. REUTERS/Andrew Kelly

The Georgia Supreme Court overturned a lower court ruling that a four-year statute of limitations barred the investors who brought the case from suing Proskauer. The trial court erroneously found that the plaintiffs failed to “exercise due diligence” to learn of the law firm’s alleged misconduct sooner, according to the opinion.

Proskauer and two of his outside attorneys did not immediately respond to requests for comment on the ruling. Neither do plaintiffs’ attorneys Douglas Coe and Jacqueline Coe.

Wednesday’s decision revives a lawsuit by the Coes, who, at the suggestion of their accountants, BDO Seidman, obtained legal advice from Proskauer in 2002 on a BDO-recommended strategy for investing in distressed debt to offset obligations taxes related to the sale of their business, according to the judgment.

Proskauer advised the Coes that the strategy would likely survive an IRS audit without penalties, according to the ruling. The Coes relied on Proskauer’s opinion for their 2001 tax return, which was later audited, leading the Coes to a 2012 settlement with the IRS.

The Coes sued for professional misconduct, negligent misrepresentation and other claims against Proskauer in 2015, alleging that the law firm, BDO and investment adviser Gramercy conspired to promote such evasion schemes tax and shared costs, and that Proskauer and BDO were not independent.

A representative for Gramercy declined to comment. A BDO spokesperson could not immediately be reached.

An appeals court in 2021 upheld a judgment for Proskauer in the case, saying the four-year statute of limitations applied to the claims and started running in 2002. The court said Coes had no not shown that the prosecution time should be delayed – or free of charge. — because they should have been “aware” of their claims based in part on media reports of BDO’s promotion of similar tax shelters that turned out to be illegal.

Georgia’s high court ruled Wednesday that the appeals court should have weighed the allegations of fraud and negligent misrepresentation separately from the malpractice claim when considering the statute of limitations. He also said that although claims of fraud and negligent misrepresentation began to run in 2002, the appeals court erred in concluding that the Coes had failed to “exercise due diligence to uncover the acts allegedly fraudulent Proskauer”.

There is “a real problem[s] of material fact” as to whether Coes was aware of the law firm’s lack of independence from BDO and news reports mentioning Proskauer in connection with the scheme, the court heard.

Sara Merken reports on privacy and data security, as well as legal affairs, including legal innovation and key players in the legal services industry. Contact her at [email protected]

How much does the destruction of a nuclear power plant cost? Not as much as it cost to build – Orange County Register