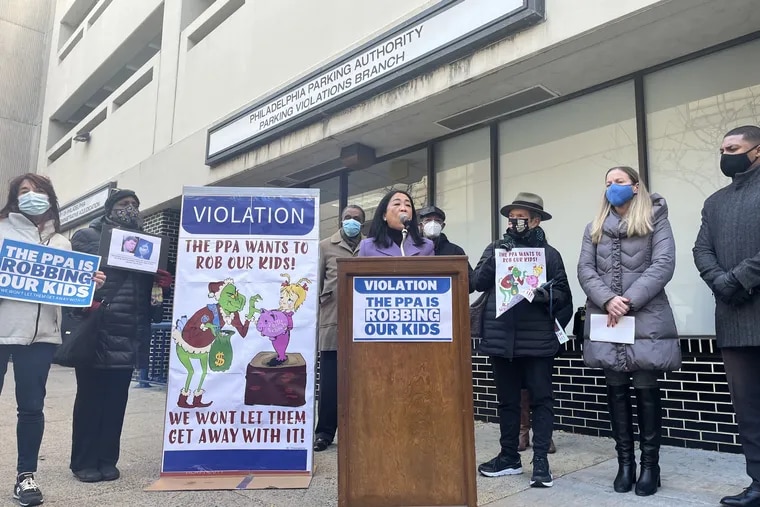 A group of public school advocates on Monday called on the Philadelphia Parking Authority to write off an $ 11.3 million debt it had incurred against the city’s school district and called for increased scrutiny of the city of what she describes as the financially reckless agency.

The parking authority says it needs to get this money back after recently learning that it miscalculated its own pension costs two years ago, which would have significantly reduced the authority’s $ 14.3 million contribution to the Philadelphia School District for fiscal 2020.

Outside the PPA payment center in Center City on Monday, board member Helen Gym and other school funding advocates held up signs comparing the PPA to the Grinch – Dr. Suess’ snub nosed gremlin who steals money. children at Christmas.

“Two years ago they made a mistake and now they want their money back from the school children in Philadelphia,” Gym said.

PPA spokesperson Marty O’Rourke said the debt cancellation would violate government accounting standards, but the authority “will continue to work with the district and city on how this issue will be. resolved”.

Since 2004, the PPA has been required to pay the majority of its on-street parking revenues to the city. That payment is capped at a certain amount, and whatever is left goes to the school district, which in recent years has ranged from $ 0 to over $ 15 million.

The PPA has not paid any dollars to the district in the past fiscal year, due to the pandemic that has gutted street parking revenue. The alleged overpayment occurred in the previous year, although it was only recently realized.

Notably, the PPA calculation errors that year had no impact on the payment of the PPA to the city. Mayor’s spokesperson Kevin Lessard said the agency distributed the maximum capped amount for fiscal 2020 to the city, and the increase in costs claimed by the PPA only had an impact. on the remaining amount reserved for the district.

Advocates and the school district challenge the PPA’s claim that increased pension liabilities should be factored into the agency’s annual contribution to the perpetually cash-strapped district.

Gym accused the parking authority of “plowing” additional expenses under the category of street income expenses in order to reduce its annual obligation to the school district. Emails obtained by the Inquirer show that the PPA was unable to provide data to support its position that the late retirement obligations had an effect on the authority’s financial commitment to the district.

O’Rourke said retirement expenses have “been systematically factored into the calculation of the PPA payment to the school district,” as noted in government accounting regulations.

O’Rourke said the PPA retained accounting firm Boyer & Ritter LLC to conduct a review of the agency’s financial position in March 2018, and pension cost obligations had been put in place. light thanks to their audit of several years.

Lawyers have presented the $ 11.3 million gap as the latest in a series of deceptive financial maneuvers by the authority. In 2014, the PPA promised that an increase in the parking rate of 50 cents per hour would bring the school district millions in additional revenue. Instead, the annual PPA contributions have plummeted.

“This is hypocrisy,” said Donna Cooper, executive director of children’s advocacy group Children First, of the agency’s claim for reimbursement from the school district. “This is financial mismanagement 101.”

Calling for more accountability, Gym proposed an annual review of the PPA’s budget, led by the administration or mayor’s council, like other city agencies. O’Rourke did not say whether the agency would agree with this, noting that the PPA publishes its proposed budget online every year, along with audits of its contractors.

There have been few external audits of the agency – and much controversy surrounding past attempts to probe its finances.

Over the past five years, the PPA has been audited by two external government agencies, which have identified a series of misconduct, financial missteps and other long-standing issues, including overpaid executives and a glut of hires. by patronage.

The PPA’s revenue-sharing formula, which is codified in state law, has also been criticized.

A 2017 audit of the Auditor General of Pennsylvania called the current funding formula “immense harm” to the school district and its students because it only receives the remaining dollars, while the city receives a fixed amount.

The audit also found that the APP had a “continual lack of communication” about payments, which resulted in errors over a five-year period.