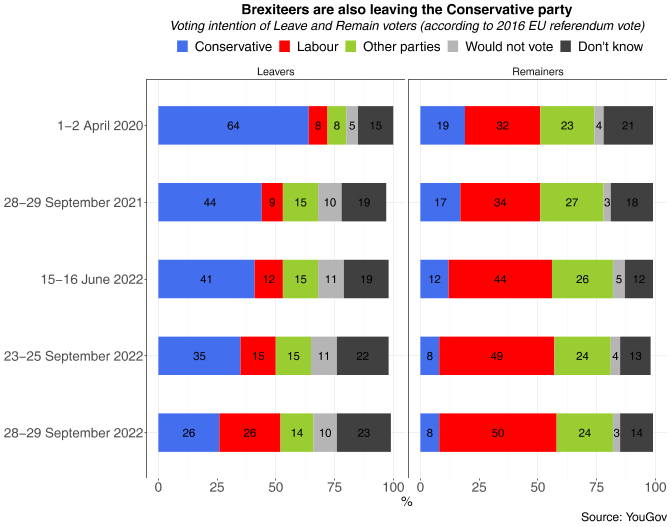 The new British government has abandoned some of its plans to cut taxes. Brazil is heading for a second round of presidential elections. Indonesia is the first country to approve an mRNA vaccine developed by China. West African states face a political conundrum in the wake of the coup in Burkina Faso.

Meanwhile, there is speculation that malaysia the parliament could be dissolved, the formation of the government in Bulgaria will be complicated, the American Secretary of State will go Colombiaand the new board South African the Eskom electricity utility took over.

Chart of the week

After days of market turbulence, the UK government budget plans seem to alienate the conservative base. The latest polls give Labor a substantial lead over the Tories. Two trends are worth highlighting. First, a significant share of those who voted Conservative in the 2019 general election – around 17% – would now vote Labour. This proportion of Conservative switches is similar to that seen in Tony Blair’s landslide victory in 1997. Second, the Conservative party is becoming less hegemonic among Brexiters. In fact, the graph above shows that today as many incumbents would vote Conservative as Labour, suggesting that ‘trusonomics’ – particularly in the context of the cost of living crisis – is not particularly popular among large sections of the population. 2019 Conservative Election Coalition.

The government has announced a major reversal of its controversial plan to cut the top tax rate. This follows last week’s market rout and the rise of major opposition among Tory backbenchers. The next panel to watch is whether the government’s decision appeased or emboldened moderate MPs – most of whom voted not for Truss but for Rishi Sunak who had opposed the tax cuts. The internal politics of the Conservatives will in turn depend on the reaction of the market in the coming weeks. More uncertainty is likely, as Truss will constantly have to determine how far she can push the small states agenda she has promised Conservative members.

There will be a runoff election on October 30 following a wave of votes for President Jair Bolsonaro at odds with all major pollsters and poll aggregators. Former President Luiz Inacio Lula da Silva won 48.43% of the vote, as expected within the margin of error, against 43.20% for the President, 6-7 percentage points above the poll result the day before the elections. Lula won with more than 6 million votes, the best result ever for a candidate in the first round, but the president did surprisingly well in the crucial Southeast region (43% of the electorate) . The specter of a Lula first-round victory may have stirred strong anti-Workers’ Party sentiment that may have spared Lula, but wreaked havoc on all other major left-wing candidates at the federal and state levels. states. Bolsonaro is expected to set aside his challenge to the electronic voting system in the upcoming second round.

Indonesia has become the first country to approve a Chinese-developed mRNA vaccine, even before China itself. Indonesia’s Food and Drug Agency (BPOM) approved Walvax Biotechnology’s vaccine for emergency use on Sept. 30, although the company has yet to release stage trial efficacy data. progress underway in Indonesia, Mexico and China.

The Economic Community of West African States (ECOWAS) faces another political conundrum this week following the September 30 coup in Burkina Faso. The West African bloc will have to decide whether to impose new sanctions on the Burkinabè military regime after a dissident faction of the army, led by Captain Ibrahim Traoré, ousted military leader Paul-Henri Damiba, who himself had seized power in a coup by former civilian President Roch Kaboré in January. The latest coup casts a shadow of doubt on the July 1, 2024 timeline previously agreed between ECOWAS and the Damiba-led regime for a return to constitutional order.

The 2023 budget will be tabled on October 7 and there is speculation that parliament will be dissolved soon after to allow a snap election to be called in November. Prime Minister Ismail Sabri Yaakob may want elections to be held later, but he has been foiled by factions of his United Malays National Organization (UMNO) party who want this year. Since the monsoon normally intensifies in December, the window for elections is next month. Yaakob said last week he was set to meet the king – although it is unclear when – to discuss possible election dates.

Another highly fragmented parliament following snap parliamentary elections on October 2 will lead to a complicated government formation process. While the centre-right Citizens for European Development of Bulgaria (GERB) party has won most of the mandates and will have a first chance to form the cabinet, the party of former Prime Minister Boyko Borissov is unlikely to win. to get the majority needed to form a stable government unless it cooperates with the pro-Russian far-right revival. The centrist We Continue the Change (PP) which won second place also lacks potential coalition partners to form a majority government. As noted earlier, the lingering political stalemate could result in a temporary technocratic government or another snap election in the winter. The first option seems more likely as virtually all political parties agree that a stable government is needed to face the multiple challenges over the coming months.

Voters will head to the polls in Lower Saxony’s regional elections on October 9. During the last regional election of the year, the local branch of the Social Democrats (SPD) of Chancellor Olaf Scholz seems well placed to defend this major state. Such a result would be good news for the Chancellor the day after the presentation of her government’s 200 billion euro economic support plan. However, the fate of Scholz’s smaller coalition partners – especially the Liberals (FDP) – needs to be watched.

Asanticipatedthe centrist New Unity (JV) party led by Prime Minister (PM) Krisjanis Karins won most of the mandates (26/100) in the general elections on October 1 and is likely to have a first chance to form a new coalition government. President Egils Levits is expected to appoint Karins as prime minister for the second term, which is backed by JV’s likely coalition partners – the right-wing National Alliance (13 terms) and the United List (15 terms). The three parties – which together would have a narrow majority of 54/100 mandates – could also be joined by the center-left Progressives with ten seats. JV’s top priorities include international and national security, economic competitiveness, and education reform. More generally, the election result reflects strong voter support for the pro-Western reform policies pursued by the Karins government in recent years.

Parliament is set to begin its new term with a vote on a new social media bill aimed at curbing dissent. The bill aims to tackle what the government calls “fake news, misinformation, provocation and lynching of justice in social media”. The proposed legislation has been criticized for the use of vague terms and criteria, as well as the risk of abuse by state authorities. The new legislation is the latest effort by President Tayyip Erdogan’s government to put in place a legal mechanism that censors critical posts and videos ahead of the 2023 election.

US Secretary of State Antony Blinken will be in Bogota today, October 3, for a meeting with President Gustavo Petro. As the United States seeks to make sense of Petro’s call for a new approach to the war on drugs, Blinken will seek clarification on Petro’s proposal to rethink extradition, which has been a key tool in US counternarcotics policy. Petro’s decision to unfreeze relations with Venezuela will also no doubt be discussed, as will parallel moves to begin peace talks with the National Liberation Army (ELN) guerrilla group and to bring organized crime groups under the umbrella of Petro’s “total peace” initiative. Additionally, Blinken is likely to sound out Petro about a stronger condemnation of Russia’s recent annexation of four regions of Ukraine ahead of a meeting of the Organization of American States (OAS) General Assembly that will take place. will be held in Lima later this week.

Electricity company Eskom’s new 13-member board took office on 1 October. Although somewhat enriched with expertise in engineering, energy and accounting, the board will face impossible pressure to improve Eskom’s worsening load shedding and declining energy availability factor (EAF ). Last week, EAF was only reaching 55% of installed capacity, with unplanned outages worth 15,862 MW and planned maintenance worth 5,206 MW. Record outages are fueling calls for the removal of Eskom CEO Andre de Ruyter, even as he grapples with financial and operational legacy issues that are largely the result of policy failures.

The views and opinions expressed in these articles belong solely to the authors and do not necessarily reflect those of Teneo. They are offered to stimulate thought and discussion and not as legal, financial, accounting, tax or other professional advice.